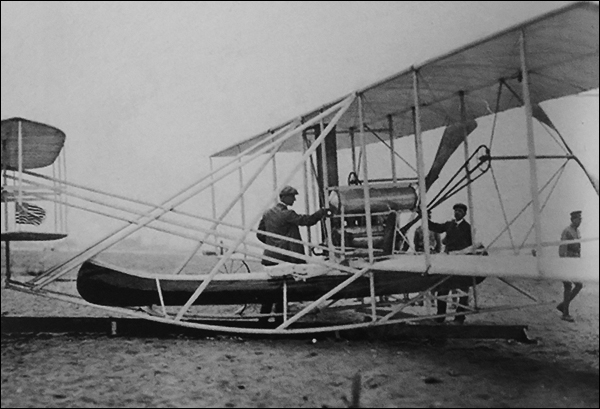 Southeast of Liggett Terrace is the Early Birds Monument, the first public sculpture on Governors Island. From a distance it looks like a propeller mounted on a base. What it symbolizes is the men and women who flew on the island prior to 1916. The propeller was cast from a plane that belonged to the Wright Brothers. It was dedicated in 1954.

In 1909 Orville and Wilbur Wright were at the top of the new field of aviation and were international heroes. In the new book The Wright Brothers, David McCulloch masterfully recounts the period before and after their pioneering flight at Kitty Hawk, N.C.

The Wrights were in competition with Glenn Curtiss, another aviation pioneer who flew in early flight demonstrations on Governors Island. In late 1909 Orville was in Europe to drum up business and conduct demonstrations. He appeared in Berlin at Tempelhof Field to give a demonstration; more than 200,000 turned out to see him fly with a student pilot. Their one-hour and thirty-five minute flight set a new world’s record for a flight with a passenger. Meanwhile, Wilbur was in the United States.

New York loves a celebration, and a massive one was planned in 1909 for the 300th anniversary of Henry Hudson’s journey on the Half Moon up the Hudson River to Albany. This was joined with the 100th anniversary of Robert Fulton’s first steamboat trip on the Hudson. Wright accepted $15,000 (about $355,000 today) to fly in New York. Curtiss would also be there.

This led up to the first time an airplane flew over water. Wilbur sent a letter to Orville with the precautions he’d take before going to Governors Island:

So I have gone back to my old plan of mounting a canoe under the center of the machine, well forward… Of course, I do not expect to come down, but if I do I will be reasonably safe.

The plane was shipped to Fort Jay and assembled on the Island. As the legend goes, a few days before the flight, Wilbur Wright went into a hunting and sporting goods store on Broadway and purchased a canvas-covered canoe to affix to his aircraft.

One of the greatest spectacles in city history was about to play out for Wright’s flight. As many as 1,600 vessels were in New York Harbor: 20 U.S. Navy battleships, part of the Royal Navy fleet, naval ships from Argentina, France, Germany, Mexico, and the Netherlands. Pleasure boats and private yachts anchored off Governors Island nearby ferryboats, tenders, steamships, anything that could float had passengers looking to the skies.

Governors Island had two airplane hangers. They were located nearby where today is the abandoned Brick Village housing near Liggett Terrace, a short walk from the South Battery. The landing strip was built on the landfill, south of Liggett Hall (which would not be built for another 20 years).

The day of the flight, newspaper reporters swarmed the island. Also in attendance was Guglielmo Marconi, inventor of the wireless telegraph. He made a point to shake hands with a nervous Wilbur Wright. Marconi’s job that day was simple: when the airplane departed, he was to send a signal to the ships in the harbor; the ships would then alert others by raising their semaphore flags.

On Governors Island, Wright spent his time in the hangar preparing his plane. While he kept the reporters locked out, he welcomed the young boys of the garrison, children of the soldiers. His “kindly smile” was seen as he “explained every detail on the machine” to the kids. Later he walked over to the South Battery and had lunch at the Officer’s Club.

On September 29, Wright took an early morning ferry to the Island and started tinkering with his machine. Around 9:00 a.m. he made a short practice run over the Island, just seven minutes, circling Governors Island. It was the first flight over water, with a 14-foot red canvas canoe hanging underneath the white and silver Flyer. When he touched back down, he announced he was ready.

Marconi sent the telegraph to the ships and shore, to prepare the crowd. Everyone expected Wright to fly to the mouth of the Hudson, but he didn’t. He took off from Governors Island and headed straight for the Statue of Liberty. He swung west into the wind and aimed straight for the statue. In the Harbor, tens of thousands watched. Wright sailed low over the Lusitania, which was departing New York, bound for Liverpool. Passengers frantically waved hats and scarves at Wright, who flew a beautiful loop around the Statue, circled low, and with perfect control executed a series of dips and turns.

Wright’s flight was sensational news, and that he had taken off and landed from Governors Island and looped around the Statue of Liberty—over water—was the story of the year. It was front page news around the world. The New York Evening Sun account said:

Once his great airplane, so near the horizon that it seemed once with the ocean gulls which it flew…[was] just above the level of the feet of the Statue of Liberty. An instant later it appeared at the level of the statue’s breast and then passed in front on an even keel.

In the air Wright seemed to pause for a moment topaz the homage of an American aviator to the lady who attests his countries destinies. Then suddenly turning westward with the wind, he sped rapidly over the waves while the harbor craft shrieked their welcomes, and the cheering men and women ashore bore witness that our Lady of Liberty had been visited by one of her children in a vessel needing only the winds on which to sail.

Wright touched back down on Governors Island. “Goes pretty well, Charlie,” he was reported to have said to his mechanic, Charlie Taylor. “Looks alright to me, Will,” replied Charlie. Windy conditions grounded Wright and Curtiss for two more days. Everyone wanted to see Wright fly up the Hudson, and they had to wait until October 4.

It was almost too windy for Wright, blowing 16 miles an hour, but he thought it would only get worse if he waited. When the crew rolled his airplane out of the hangar, Wright saw the fuel tank wasn’t full. He filled it up himself. As he readied the plane there was only one difference from the previous flight. His sister, Katharine, had sent a small American flag to him. He affixed it to the rudder to fly over New York.

At 9:53 Monday morning, Wright took off from the Island like a dart. He flew low over the ships and headed north towards the mouth of the Hudson. The ships signaled below; perhaps a million people lined the shores of New York and New Jersey. Flying at perhaps 150 feet above the water and around a speed of 36 miles per hour, Wright flew along the Jersey side of the river with wind currents buffeting his plane. He recalled he was so low over the battleships in the water he “could smell the smoke from them.” A British battleship fired a salute.

Wright spotted the dome of Grant’s Tomb at Riverside Drive and 122nd Street and thought he’d gone far enough. He banked a 180-degree turn and headed back down the river, picking up more speed than he had before. The banks of the river were lined on both sides, and scores stood on rooftops to get a glimpse of the pilot from Ohio. He landed back on Governors Island at 10:26 a.m. after traveling 33 minutes in the air. He had planned a second flight for later in the day, but a cracked piston rod ended that plan.

This was one of many early aviation flights from Governors Island. The Army didn’t know what to do about aviation training and planning, and the small airfield would get frequent use from this period up until World War I.

For Wilbur Wright, this was one more pinnacle in his career. He didn’t live much longer to enjoy his success. Wright died of typhoid fever on May 30, 1912. The propeller from his plane, and his name, are memorialized on Governors Island. 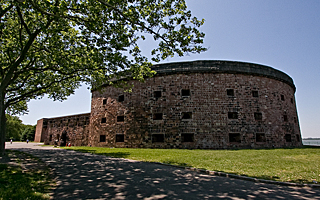 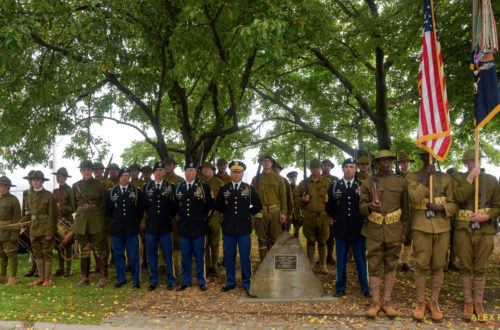 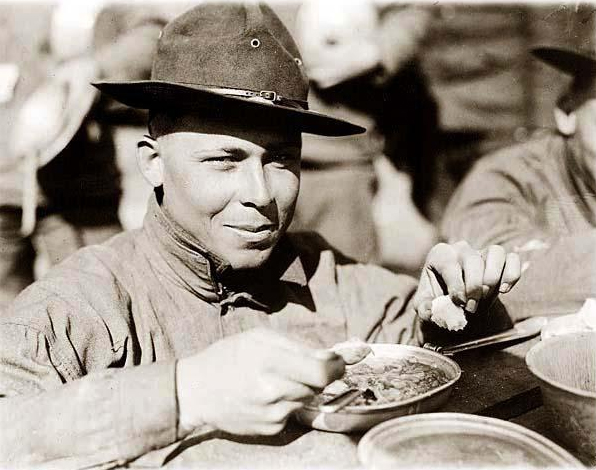